Happy Monday, and happy post-Easter sugar coma recovery! We spent the weekend relaxing, hunting eggs, and having fun with cousins, and now we’re all shaking our sugar sillies out and soaking in the sun and green grass.

Green grass means spring, and on ranches all over the country, spring means it’s branding season, as you probably know by now considering I’m sort of in love with branding time and don’t care who knows it!

Some ranches have one or two big brandings, or a whole month where they do nothing but brand. We brand in about ten small groups of 80-120 because we need to keep the cows in manageable groups for AI and it works better for us to keep them separate. So, one or two mornings a week you’ll find the whole outfit at one of the camps branding calves. This includes our littlest cowboys, too, and I get lots of questions about what I do with the boys while we’re branding since there are horses, calves, vaccine guns, ropes, branding irons, and the branding fire, and absolutely none of these things are toddler friendly.

Until this year, Wacey was confined either in my Solly wrap (when he was a baby baby) or my Ergo carrier (when he was bigger), or strapped into his stroller in the branding pen. I’ve also seen people used Pack N’ Plays for this purpose too–Wace didn’t care for that but I’ll try it again with Buster because I like the idea that they can have a little freer movement happening. We have a running joke that all of the ranch horses can be advertised as “stroller broke” should they ever be in a sale since they’re around the strollers so much! 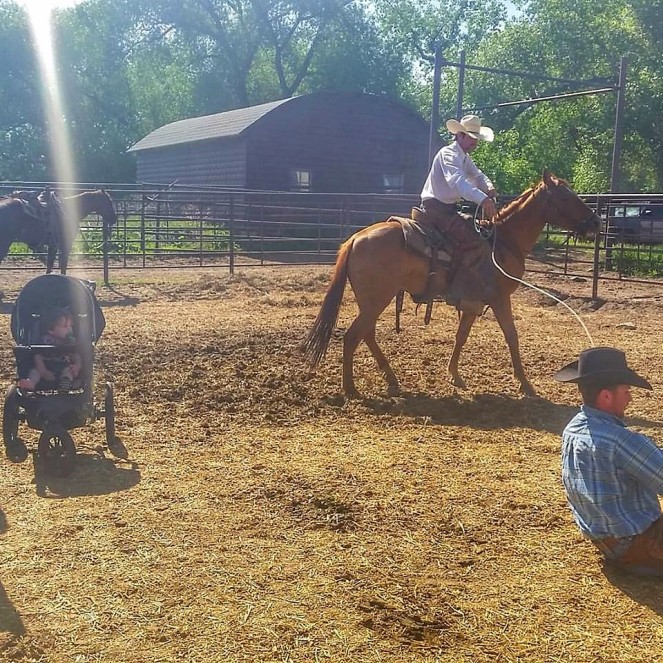 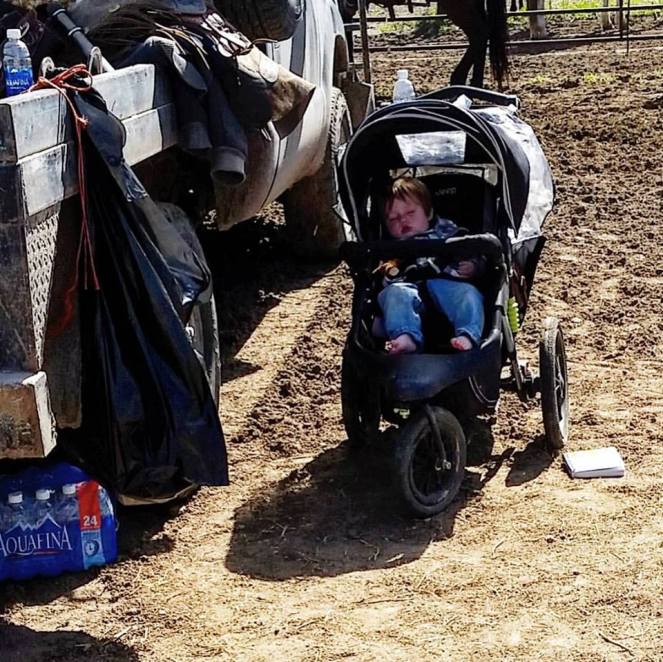 Since he’s bigger and more mindful of things (and of us) than he was last year, our Biggest Little Cowboy has been allowed to “help” this time around, and he really, really enjoys himself. Buster is, of course, not allowed to join in on the festivities in any other capacity than being strapped to my person in the Solly, which he prefers since he sleeps the whole time. If the weather sucks or it’s too windy, I’ll put Buster in the backseat of the pickup with the windows cracked and let him snooze. He prefers this scenario to being blown around and getting dust in his eyes, and it’s easy to check on him since the pickup is right there in the pen.

Even though Wacey loves helping, he’s still a toddler, and thus has about a five-minute attention span and an insatiable need for snacks. After three brandings so far, here’s what seems to work for us.

A pen and notepad. My responsibility at brandings since I seem to be perpetually kangarooing a tiny human consists of making a list of the calves we brand to keep our breeding sets and inventory straight. Wacey likes to follow me around with his record-keeping supplies and write his own notes. Bonus if he gets to use a pen that’s typically off-limits, like one of Bert’s ballpoint pens (off-limits due to his inexorable desire to draw on my leather sofas, both of which are currently sporting some WJJ original artwork). 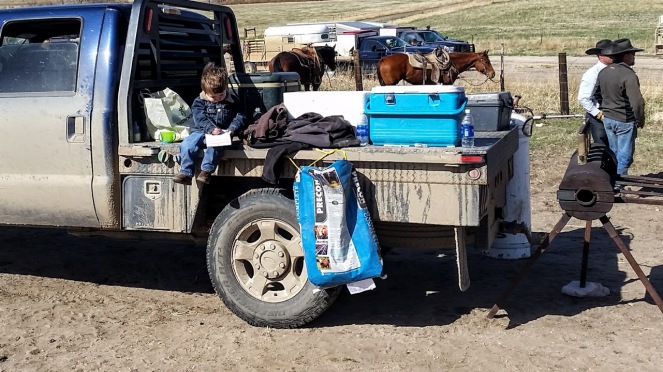 Snacks. I bring lots of snacks, including a little tupperware with some mini m&ms–those things will buy you lots and lots of time. He spent a half hour at one branding last week burying the m&ms in the dirt and then uncovering them and eating them. Rinse and repeat! #immunesystemsupport (right?)

Cups and bowls and other things to put dirt in. Playing in the dirt is always a big time, so I keep plastic containers (Take n’ Toss cups, tupperware, ets) handy so he can have a little dirt-scooping sesh in between helping daddy. This is also helpful in pens where he can’t be in the middle of things because there’s not enough room and he needs to be occupied in another pen or behind the fence.

Gates. When all else fails, or Wacey needs to be completely out of the way, I stick him in the nearest alley and watch him while he opens and closes gates! 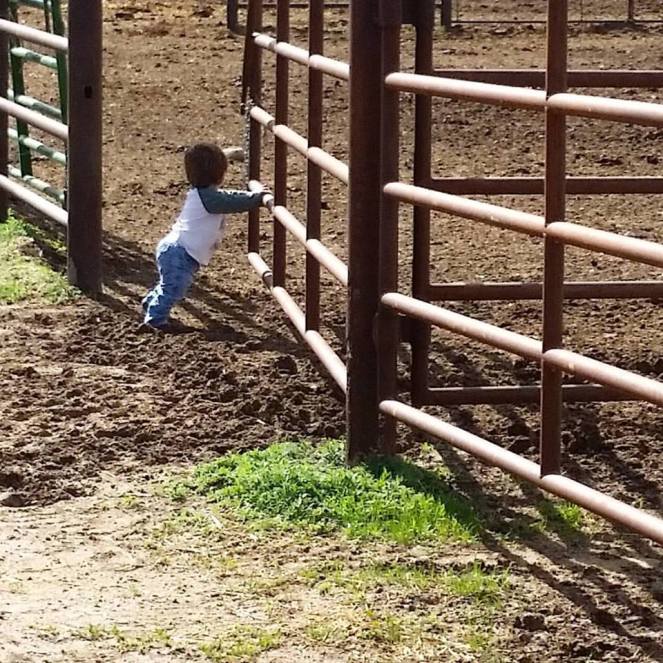 Dad. Bert lets him help him wrestle calves or give shots when he can, which basically consists of Wacey running around behind Bert yelling “Moooooooooo!!! Dada! Moooo!”

The big, major disclaimer here is that one of us (or another responsible adult) is always with him, or he’s tucked safely out of the way. All the guys are always on the lookout for him, and we would not allow him to be loose like he is without the crew being on board. The guys are really good about being patient if he wants to help, or letting me know if they’re on an inexperienced horse so we can take a little more care to keep the boys safe while that horse is in the branding pen. It truly takes a village (or a ranch!). It also helps that Wacey lives for this stuff–he knows that he won’t be allowed to participate if he doesn’t mind us, and that’s the worst-case scenario for him. It’s also nice that we brand in the mornings when everyone is fresh and not overtired and it’s isn’t too hot. That helps keep us off the Overtired Struggle Bus, which is a super fun place to be when you throw in all the branding chaos and the mid-afternoon “Why aren’t adult naps a thing” slump.

Basically, we try to make branding pens as fun and safe for the littles as we can, while planning for complete meltdowns, bad weather, the dreaded Hangries, and the other livestock-related variables, while praying that everything goes off without a hitch.

Sometimes it’s a major success, and sometimes it’s a disaster, but it’s always a good time. Also, I am 100% convinced that there is nothing cuter than babies in cowboy hats, so that helps.