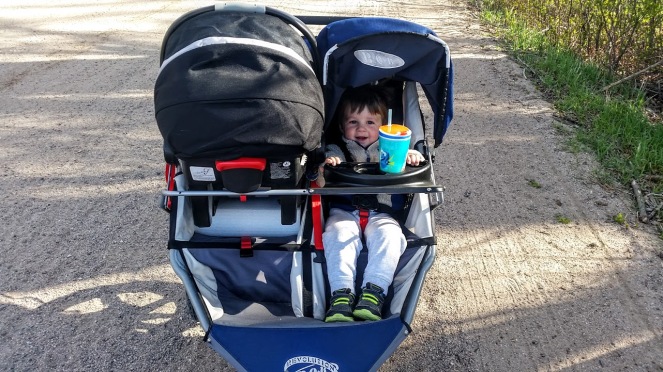 one: the double BOB. I am LOVING this stroller, y’all. If you’re on the fence, just go out and get you one (or start hunting on Craigslist ha). Granted, I haven’t tried very many doubles (you know I researched the heck outta them, though), so I’m not an expert, but I love ours. My favorite features? Those glorious sunshades that mean I can take Buster even on windy days since the shade fits right up underneath the carseat’s shade so he’s in a warm little cocoon, and the fact that it’s so light and easy to steer!

two: wedding fun. Tomorrow is Bert’s cousin’s wedding, and our first formal outing as a foursome. The boys have matching shirts, I’m wearing a gorgeous skirt that makes me feel so good, which is a postpartum miracle, and the weather’s supposed to be good, so I’m looking forward to it. Almost all of Bert’s family will be there (which is saying something, his mama has seven siblings), and it will be fun to meet some of them that I’ve never met before. We’ll be missing his sister and her family, though, but she’s got to stay close to home since she’s due with her second babe any week now (we love you aunt Cait!)

three: this gal. Is so pregnant. We’ll start watching her for reals in a couple of weeks, but if you’ve ever been pregnant, you know this stage, and you feel for anyone who’s in the thick of it.

four: I weighed Buster yesterday for funsies, and he’s officially over 11 pounds since I got a big fat “Err” on our kitchen scale…that only goes up to 11 pounds. I know comparing them is silly sometimes, but I’m still in awe at how big Buster is. At two months, Wace weighed 10 lbs 1 oz, so we’re working with a whole new level of chunk this round! I’m so excited to see how Buster is doing at his two-month appointment in a few weeks, since around two months is when Wacey really started to pack on the pounds. Also: this is his “It’s 10 pm I’m ready to party” face.

five: last, but so not certainly least, my little sister is in town! She lives in Nashville and hadn’t met Buster yet, so we’re so excited she’s here. I subbed in a trip to town this morning (okay, an excuse to go get coffee and go to the library) since it’s too cold to take Buster out on a walk, and it was so fun–we used to go to get coffee and to the store for picnic lunch supplies all the time, so it was like I was seventeen again…except with two babies. Right.

One thought on “Five on Friday”