(this is another post that might get a little heavy on the ranchy words, so if you need clarification, please head over to the Terms and Resources page!)

We had such an unusually busy weekend and despite the fact that I am ready to sleep for a thousand years, it was so great. Saturday my mom and I went into downtown Denver to see the Colorado Symphony play the score of Harry Potter and the Sorcerer’s Stone while the movie was playing and it was everything I hoped it’d be. I bought the tickets the minute they became available this summer, and I’m so glad I did. It combined my absolute love of Harry Potter and movie scores and symphonies with my nostalgia for my band days (yes, those happened–I started playing the clarinet when I was eight and played the bass clarinet in my high school’s Wind Ensemble). We had a long, leisurely dinner beforehand and oh my gosh, so relaxing. My mama and I don’t get to spend much one-on-one time together, but we need to step up our game because this was such a great time.

And yes, I only got one picture. That’s how great it was!

I got home late (after stopping for a Slurpee on my way home because slushy drinks are probably one of my larger love languages, particularly when With Child and holy cow how late are 7-Elevens open?!? I mean I’m not complaining but gosh), and we all woke up early Sunday morning to head to the National Western Stock Show in Denver. The ranch had two entries in the Red Angus pen show yesterday (two pens of three bulls each), and they did a really great job. The bulls looked so good! Two of the bulls that were shown were two that Bert calved last year, which is a big deal because he calves the heifers, and it shows that our breeding program is becoming more successful because our first-time moms are raising some really nice calves.

These shows are important because they show the industry what the ranch is doing in terms of our genetics program, and the quality of cattle that we are raising here. We are not a traditional seedstock operation, so we don’t have a formal sale, but we do offer a limited number of bulls and replacement heifers for sale each year, and taking animals to stock shows is one of the ways we market them. We also sell straws of semen of certain animals for other operations to use in their AI programs, so there’s more to ranching than just selling weaned calves for beef!

I have almost no knowledge of showing cattle, but I can tell you that the time and work and dedication it takes to get an animal ready for show day is astronomical. Months and months of preparation and effort go into making these cattle look their best and represent the best of our program! 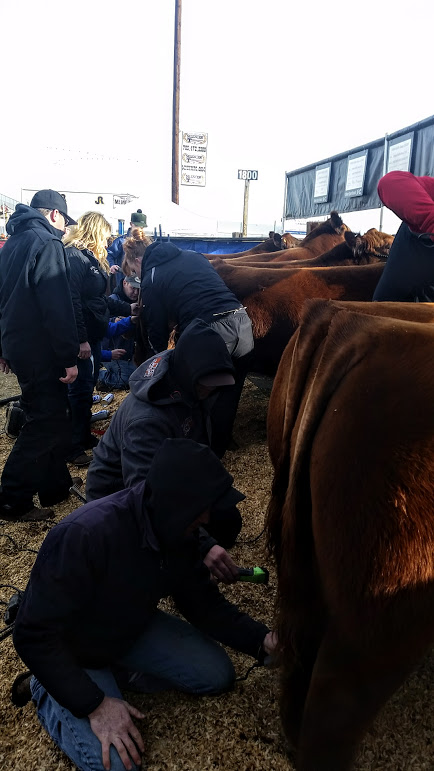 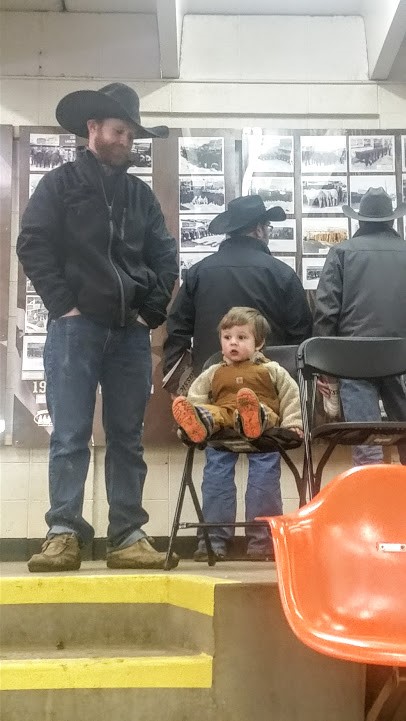 After being prepped for the show (with help from our littlest cowboy) the bulls are led to the show ring, where they are shown individually, but as part of their pen of three. At the very end, the judges asked for all the entries to come back into the pen all together for further scrutiny. It reminds me of a dance competition: months and months of preparation and hours of hair and makeup for two minutes in front of a judge to prove your point! The bulls looked so nice, and behaved pretty well–there was one rogue character who was not impressed by the pomp and circumstance of the day, but we’ll forget about him because he got his act together at the very last minute. At least he behaved better than a Hereford up the way who was leading his handler up the ice and slush like he was on skis–guess he was just really excited to strut his stuff in the show ring!

Today’s takeaway: if you have a stock show or state fair in your area, go! There’s more to them than rodeos and vendors, although those are a really fun part, although we don’t always go the trade show because we’d spend every penny we make in a very fast hurry. I’d encourage you to walk through the stockyards to see the livestock up close. Some fairs and shows will even do tours of the yards or meet-and-greets with the animals. Some facilities even have a catwalk over the yards so you can see everything from above (and keep your boots clean if it’s messy weather!)

If nothing else, you know what most (I can’t say all because I haven’t been to all of them) stock shows and fairs have? Funnel cakes, cotton candy, and meat on a stick. If you don’t care about at least one of those things…well, have you tried all of them? I mean, obviously not because you can’t bat 0 for 3 with fair food. You just can’t. So go for the food, stay for the events, and mosey over and see the animals. I promise it’ll be so great.